﻿Russia has an incredibly long, rich and eventful history. There is lots more to learn through books, films and online, but we hope this will be a good starting point to discover some of the most important people and events in Russian history.  On this page you will learn a little about the early Slavs, the Viking rulers of Rus, the Mongols and their Empire of the Golden Horde, the Rurik dynasty including Ivan the Terrible, Tsar of all the Russias.  And the first Romanovs.
On the following page - Peter to Lenin (from 1672 to 1917) - you will find out about the rule of the Romanov family, the modernisation of Russia, and the Russian Revolution, which ended the rule of the tsars. 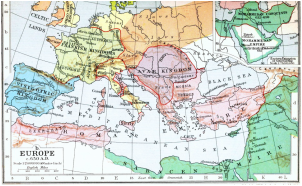 "Europe around 650". © Ramsey Muir 'Muir's Historical Atlas-Mediaeval and Modern' (London, 1911)
From about 1500 BC a group of people called the Slavs settled into the area which is now Poland and Western Russia. Although they were often under threat from other groups who wanted their land, they held their ground there until the arrival of the Vikings in the 9th century.

The map shows this Slav settlement in the 7th century in orange. 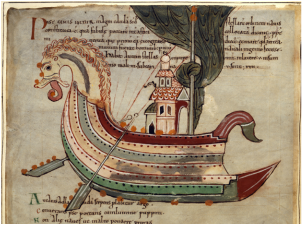 A Viking ship from the 11th Century. Credit: BBC Schools "Who were the Vikings"
The Vikings came from Scandinavia – the area that is now Sweden, Denmark and Norway. In the period from 700 to 1100, a large number of Vikings left Scandinavia by boat for Europe. Many of the Vikings were sea pirates and fighters who raided and stole from ships. Others settled into foreign lands as craftsmen, farmers or traders.

You might know that many of them came to England, Scotland and Normandy in France but not many people realise that they went to Russia too. 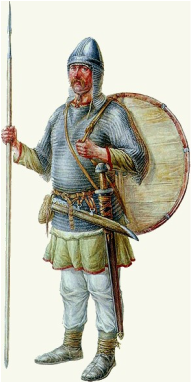 A Rus Viking. Credit: Sasha G's Pinterest page (lots of other good Viking pictures here)
Some of the Viking traders wanted to expand their business so moved deep into Russia to make the most of the rivers running North-South through Eastern Europe. That meant they could row their boats all the way from Scandinavia to the Byzantine Empire (based on present day Turkey).

In fact, it is these Vikings who gave Russia her name: a group of them who were known by the Slavs as the ‘Rus’ installed themselves in Novgorod. No one is quite sure what “Rus” meant but it might be the Norse (or Viking) word for “rowers”.

The network of river trade routes were the foundation of the territory of the Rus, but their empire slowly grew to encompass land as far south as the Black Sea, as far east as the Volga River, and as far west as the Kingdom of Poland.

The Vikings made a very important trade agreement between the city of Kiev and the Byzantine Empire. This treaty made Kiev Russia’s first major city and a hub for the trade of many goods from all over Europe, such as gold, honey, wine, silver and horses. 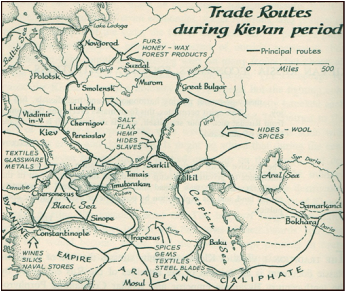 The Vikings’ descendants remained rulers of Russia until the 10th century, when they began to evolve to be less ‘Viking’ and more ‘Russian’…

From Vikings to Russians

So how did the Vikings become Russians? The story begins in 908 when a Viking prince called Vladimir captured Kiev, by now the centre of the Rus Empire, from a rival. He was proclaimed ‘prince of all Russia’ and is now known as Prince Vladimir I, or Vladimir the Great. 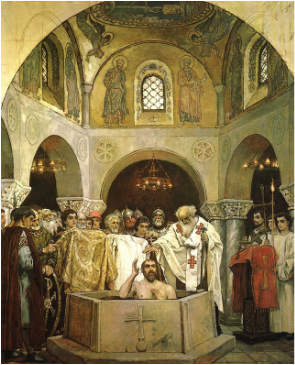 A fresco by Viktor Vasnetsov in St Vladimir’s Cathedral in Kiev depicting the baptism of Vladimir.
Most importantly to the formation of a real Russian identity, it was Vladimir who brought the Orthodox religion to Russia. Vladimir had sent envoys out on a mission to discover which of the religions – Judaism, Islam, Catholicism or Orthodoxy – was the best. It is said that Vladimir chose Orthodoxy for Russia because his envoys recounted the overwhelmingly divine beauty of Orthodox worship, as they had witnessed it in Constantinople (nowadays called Istanbul), the capital of the Byzantine Empire.
At the beginning, Orthodoxy was forced upon Russians. People in Kiev were forced to be baptised and if they refused they were declared enemies of the state. Slowly, however, the religion began to grow and to become more popular. Russia became a Christian stronghold, full of beautiful ancient monasteries and churches. A sacred legacy of saints, icons and religious music and literature was born.

The Mongol invasion of Russia 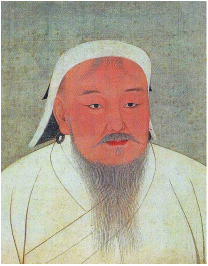 The infamous Genghis Khan
The Mongols – also known as the Tartars - were nomadic people of Central Asia who had been united under the leadership of a formidable and legendary leader named Genghis Khan (1162-1227). It was his grandson, Batu Khan, who led the invasion of Russia.

The Mongol warriors had a fearsome reputation as they were known to invade territories, and to do so violently and destructively.

At the beginning, the Orthodox Church suffered severe persecution: its churches were looted and many clergy were killed. However, one of the Mongol emperors decided to put a law in place protecting the church from all persecution, theft and damage. This allowed the church to become richer and more powerful than it had ever been before. It also meant there was a huge revival in religious art and music.
The Russian language also adopted lots of new words from the Mongol language that are still in use today, such as the words for horse, bazaar and money!

The way of governing Russia was also changed forever, as the Golden Horde used centralised power. This meant that instead of regions having semi-independent power to rule themselves, the whole Empire was controlled by the highest powers. This has remained the case in Russia ever since.
Mongol rule was finally overthrown in 1480. Thanks to strong Russian leadership Moscow had become an influential city and had even become the centre of Orthodoxy in Russia. In 1480, with a Russian prince named Grand Duke Ivan III at its head, Moscow rose up to fight for power and Mongol control of Russia finally ended. Ivan III became known as Ivan the Great. 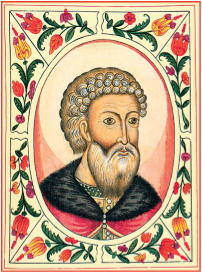 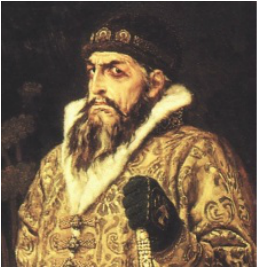 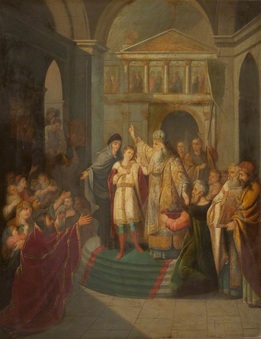 The coronation of Ivan the Terrible. ©Lancaster City Museums.
Ivan was heir to the Ruriks, a royal family descended from the 9th century Viking prince Rurik (Vladimir 1 was also related to Rurik). By the time Ivan was eight, both his parents had died. He was too young to rule so the Boyars, or Lords (Russia’s powerful landed aristocracy) chose people to rule for him called regents.

At the age of sixteen Ivan was crowned Tsar of all the Russias. He was the first ruler to be called ‘Tsar’. He chose that title instead of ‘Grand Prince’ because he wanted people to think he was not only very powerful (the Byzantine emperors had been known as ‘Tsars’) but had God on his side too, since the kings in the Bible, and even Jesus Christ, were also referred to as Tsars by the church.

Why was Ivan so terrible?

To begin with, he wasn’t really terrible and even made some good laws as well as expanding Russia’s territory even further.

But as he got older, and especially after being deeply affected by death of his beloved first wife, Anastasia, in 1560, Ivan became a ferocious leader. He was incredibly pious, yet also utterly murderous and unpredictable. He had a violent and vicious temper and many now think he was in fact unwell. He ruled through fear and awe, and here are some more of the reasons why he is called "the Terrible":
When Ivan died in 1584 he left Russia economically, culturally and emotionally scarred.

He was succeeded by his less competent son Fyodor I.

Read more about  Fyodor in Russiapedia.
After Fyodor there were many years of contested and changing leadership – the so-called “Time of Troubles”. This ended in 1613 when a Boyar called Michael Romanov was unanimously elected by his fellow Boyars as Tsar. This began the rule of the Romanov dynasty, which was to last until the Russian Revolution of 1917.