Peoples of the Russian North 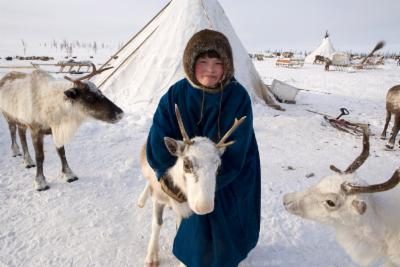 ​Oktobrina, a Nenets girl, holds a yearling reindeer at her family's winter camp on the tundra. Yamal, NW Siberia, Russia.

About two thirds of the land area of the Arctic is in Russia. Most of it lies in the vast region of Siberia. Siberia stretches from the Ural Mountains in the West to the Pacific coast in the Far East. It covers 8 time zones and it takes about seven hours to fly across it in a big jet.
Aerial view of a frozen river meandering through snow covered Boreal Forest. Yamal, West Siberia, Russia
Northern Siberia is home to at least 19 different groups of native peoples. Some of these peoples, like the Saami (Lapps) and the Inuit (Eskimos) are familiar to many of us, as they also exist in some Western countries that border the Arctic. Others, like the Nganasan and the Selkup are not so well known. One of the smallest group are the Entsy, who number just 227 people. The largest group are the Nenets who have a population of over 44,000. ​
Draught reindeer in a corral at a Nenets reindeer herders' winter camp. Yamal, NW Siberia, Russia
L-R:
Nadia Takui takes 18 month old Rima Votgyrgina, to watch the reindeer during the Chukchi 'Festival of the Young Reindeer' out on the tundra. Iultinsky District, Chukotka, Siberia, Russia.
A Nenets woman and her daughter dressed up for a Spring reindeer herders' festival. Yamal, NW Siberia, Russia

For the herders and their families reindeer were like a department store providing them with most of the things they needed: food, clothing, transport and shelter (skin tents). All Arctic peoples used reindeer skin for their clothing because it’s very warm and durable. Reindeer hair is hollow, and that combined with its dense under fur provides excellent insulation against the severe cold of a Siberian winter.
L-R:
Three Chukchi Yarangas (traditional tent) at a reindeer herder's summer camp. Iultinsky District, Chukotka, Siberia, Russia.
The Vanuito family, Nenets reindeer herders, at their winter camp on the tundra near Tambey. Yamal Peninsula, Western Siberia, Russia
Nadia Takui, a Chukchi girl, dressed in a traditional reindeer skin Kerker, (knee length coverall), sitting at the edge of the polog (sleeping area) in a Yaranga (tent) at a reindeer herders' summer camp. Iultinsky District, Chukotka, Siberia, Russia
​
Although the vast size of Siberia has ensured that these northern cultures have survived, the modern world has made its presence felt even in the remotest areas. Today it’s only a minority of native peoples who still follow a traditional lifestyle, but traditional activities like hunting, herding and fishing remain important both culturally and economically. In the isolated coastal hunting communities along the coast of Chukotka in Siberia’s Far East, Chukchi and Yupik families still rely on sea mammals like whale, walrus, and seal as an important source of food. In the Yamal region of north west Siberia, reindeer breeding continues to play an important role in both the culture and livelihood of the Nenets people, with 14,500 herders managing 600,000 reindeer. The meat is sold for both the domestic market in Russia as well as being exported abroad.
L-R:
Standing by his baidarka (walrus skin boat), Yakov Vukutagin, hunts seals from the shoreline at Dezhnovka. Chukotka, Siberia, Russia
Nenets woman drives a train of reindeer on the migration Yamal. Siberia. Russia.
Lema, a Chukchi woman, rests on her sled during a break on a journey by dog team. Uelen, Chukotka, Siberia, Russia
Workers checking the seams of a gas pipeline being constructed during the winter near the Yurharovo gas field. Noviy Urengoi, Yamal, Western Siberia, Russia.

Native Peoples of the Russian North - Population in 2010