Despite all this French he also grew to love the Russian language and that was probably due to the influence of his grandmother, Maria Ganibal, and his nanny, Arina Rodionovna.  Maria Ganibal spoke only Russian.  She lived with the family when Pushkin was a child, spending a lot of time with her grandchildren, and he loved to hear her stories of their family history.    Arina Rodionovna also spoke only Russian and she told him Russian fairytales.
In 1811, when he was 12, Pushkin went to the Tsarskoe Selo Lycee. It was a new boarding school not far from the capital city, St Petersburg, and had been set up to educate boys to work in government offices when they grew up. ​
Pushkin made some lifelong friends at the Lycee – his best friends were Ivan Pushchin, Anton Delvig and Wilhelm Kyuhelbecker.   Puskhin was very happy at the Lycee and never forgot his time there. ​
Ivan Pushchin, Anton Delvig and Wilhelm Kyuhelbecker (drawing of Kyuhelbecker by Pushkin)
By 1820 the government had decided his poetry was dangerously subversive. They sent Pushkin out of the capital and into exile in the south of Russia, 1700 kilometres from his family and friends in St Petersburg. He was sent first to Ekaterinoslav (now Dnepropetrovsk in Ukraine) and then to Kishinev (now Chisinau in Moldova), moving to Odessa (now Ukraine) in 1823.
Evgeny Onegin is a poem-novel about a frivolous young man from the city who has to move to the countryside for family reasons. He treats a girl there very badly and later bitterly regrets his behaviour, realising he is in love. The poem was made into an opera by Russian composer Tchaikovsky in 1879 (trailer), a ballet by John Cranko in 1965 (2013 premiere at the Moscow Bolshoi Theatre), and a popular English-language film Onegin in 1999.

At the end of 1825 Tsar Alexander 1 died and in the following year his successor Tsar Nicholas 1 freed Pushkin from exile. Pushkin moved back to central Russia, living some of the time in Moscow, some in St Petersburg and travelling a lot. He became interested in the reformer tsar Peter the Great (1682-1725) and dedicated historical work to him. At this time he also became interested in his own family history and wrote a story Peter the Great's African based on the life of his ancestor Abram Ganibal.
​
In the autumn of 1830 Pushkin spent the autumn in the estate of Boldino in Nizhegorodsky region where he wrote several short stories and poems as well as finishing Evgeny Onegin. ​
This was a busy time. Pushkin started work in a government office again and was allowed to read historical documents in the archives which inspired him to work on historical projects. Meanwhile Natalia was thought to be the most beautiful woman in the capital and was invited to all the high society balls. The couple had four children – Maria, Alexander, Grigory and Natalia. In 1836 Pushkin was fully occupied by editing the The Contemporary magazine which published the work of the best Russian writers including his own work.
​
Despite all this Pushkin was not happy. There were many reasons – among them growing debts, problems with editing the journal, the lack of understanding from the public and the deaths of friends. 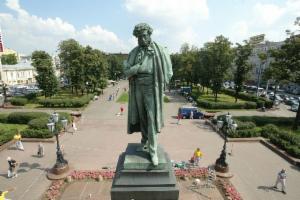 Statue of Pushkin in Moscow