Russia: the largest country in the world 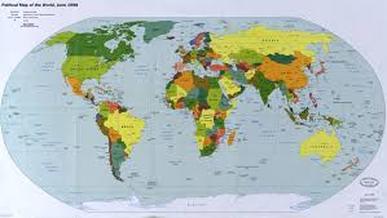 Russia is the largest country in the world.  Can you find it in this map? (Check here)

It stretches from Europe in the west to the Pacific Ocean in the east, and from the Arctic Circle in the north to the deserts and plains of Central Asia in the South. Russia is so big in fact, that the UK would fit inside it nearly 70 times over!

The largest country in the world is also home to the longest railway in the world: the Trans-Siberian Railway.

Siberia is the name for central Russia: it is an area covered in pine forests (which Russians call taiga), rivers, mountains, and, during the long winter, ice and snow. 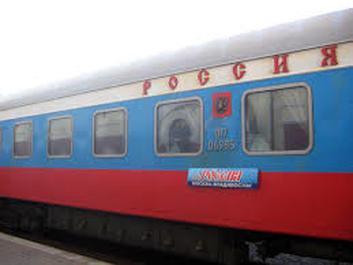 What do you think the word Россия on the train's side means?  Tip:  have a look at our alphabet decoder on the Alphabet page of this site.
The journey from Moscow to Vladivostok is over 9,000 km, which is nearly 15 times as long as the distance between Edinburgh and London by train! It lasts 8 days, and takes you through 7 of Russia’s 9 time zones. But who built this railway? How old is it? And why would anyone take on such a hard task?

History of the Trans-Siberian railway

The first railways appeared in Britain in the 1840s, as part of the Industrial Revolution. This was a time when large factories began to replace smaller workshops, and when many people began to move into cities from the countryside. The railways were a quick way of transporting goods—like wheat, coal, wood and iron—from the countryside to the cities, or from one city to another.

By the end of the 19th century, when countries like Britain, France, Germany and the United States had already become industrialised, in Russia most people still lived in the countryside and worked on farms. Because of its size and its harsh winters, transporting goods from one town to another by road or river was difficult and costly. The Trans-Siberian Railway was to be a way of speeding up this process, and of connecting the west of Russia with the east.

Work on the Trans-Siberian railway was officially opened in 1890, by Tsar Nicholas II, who was travelling in eastern Russia and Japan at the time. Tsar is the Russian word for ‘king’. At that time, Nicholas was not yet king, but a prince, which in Russian is called tsarevich. Below is a photograph of the young Nicholas as tsarevich, and another of him as tsar.
It took 26 years before the railway line was completed, but in 1916, you could finally get a train from St. Petersburg in the west, to Vladivostok in the Far East. St. Petersburg is where we will start our journey! 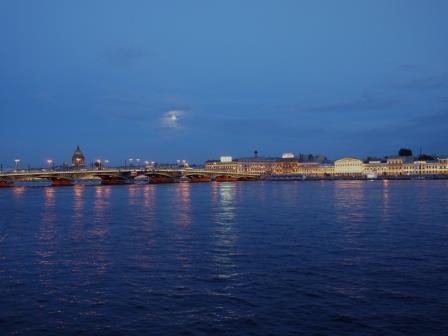 St. Petersburg is Russia’s second-largest city, after Moscow. It is in the very north west of Russia and it lies on the River Neva.  The beautiful bridges, architecture and canals of St Petersburg mean that many Russians call it the ‘Venice of the North’.    You can see one of the canals in the picture below on the left. But St Petersburg's climate is very different from Venice - the picture on the right below shows the river and the university at the end of a St. Petersburg winter, when temperatures drop as low as -30, and the Neva freezes over!
St. Petersburg was founded in 1703, by the Tsar of Russia, Peter I, or, as he is better known, Peter the Great. At the time, Russia was at war with Sweden, and St. Petersburg was the perfect location for a port from which warships could be sent. Peter studied shipbuilding as a young man in the Netherlands, and the city was built around the needs of the Russian navy. 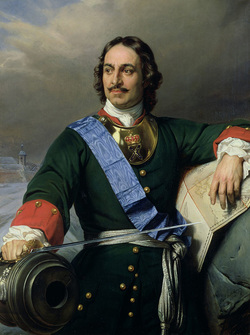 St. Petersburg was not only a military city, though. In 1712, Peter made it his new capital, and moved the Russian government from the old capital, Moscow. He wanted St. Petersburg to be a ‘window to Europe’: after travelling in Europe as a young man, Peter had grown sick of what he saw as old-fashioned Russian traditions. This meant bringing European fashions to Russia, ordering officials to learn French, and even cut off their long beards!

To the right is a picture of Peter the Great in European dress—without a beard.

Now the journey begins! Tickets ready, and onto the train. Next stop, Moscow!

Many of Russia’s most famous landmarks are located in Moscow. One of them is St Basil's Cathedral on Red Square  in the city centre, near the Kremlin. Red Square is Красная Площадь  (krasnaya ploshchad) in Russian.  The word красная means 'red', but in old Russian it meant 'beautiful' - so Beautiful Square might also be a good translation!
Have you got your luggage and your ticket?  Time to leave Moscow and ﻿get on the train to Vladivostok﻿!
Go to THE TRANS-SIBERIAN
Information for children from the Scotland-Russia Forum (Scottish charity no. SC038728)
Contact info@findoutaboutrussia.co.uk﻿